Daring You to Read - Radiant Shadows by Melissa Marr 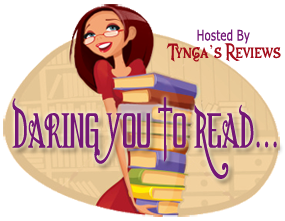 Daring You to Read is hosted every week by Tynga over at Tynga's Reviews.

Here's how it works:

- You choose a book you’ve read, loved and would dare your readers to read!
- The book you choose must be an older release (at least 6 months ago), because let’s be honest, we’re all quite aware of the latest releases.
- Write your own blog post, using the button and linking back to Tynga’s Reviews, inviting your readers to read your chosen book.
- Come back on Tynga’s Reviews and put your link in the linking tool.
- Browse other bloggers Dare and let them know if you’ve read their featured book, or plan on reading it.
- Super easy and an awesome way to discover that special book who might have slipped off your radar!﻿

This week I'm daring you to read Radiant Shadows by Melissa Marr.

Hunger for nourishment.
Hunger for touch.
Hunger to belong.

Half-human and half-faery, Ani is driven by her hungers. Those same appetites also attract powerful enemies and uncertain allies, including Devlin. He was created as an assassin and is brother to the faeries' coolly logical High Queen and to her chaotic twin, the embodiment of War.

Devlin wants to keep Ani safe from his sisters, knowing that if he fails, he will be the instrument of Ani's death.

Ani isn't one to be guarded while others fight battles for her, though. She has the courage to protect herself and the ability to alter Devlin's plans—and his life. The two are drawn together, each with reason to fear the other and to fear for one another. But as they grow closer, a larger threat imperils the whole of Faerie. Will saving the faery realm mean losing each other?

Now, I could have sworn that I reviewed this book on the blog, but looking back, apparently I have not. Which makes me sad because I believe this was my favorite of the entire series. It was just amazing.

We see two of the characters, who were mere cameos in all of the other books, up front and center finally. And they were amazing. Ani is half human and half fae, a member of the dark court and daughter of Gabriel, one of the kings Hounds. Devlin is the High Court's queen, Sorcha's, brother. Not only that, he was also her Bloodied Hands. An assassin. One who'd been ordered many many years before this story to kill Ani. But he did not.

Ani was fierce and strong. She was full of passion and fire. Devlin was the absolute perfect person for her. He wasn't intimidated by who she was or what she needed. And he didn't consider her the usual "damsel in distress" that he needed to throw coats over mud puddles for.

So in this book, Seth - Aislinn's main squeeze and now, Sorcha's "son" - has left Faerie, as per his agreement with the High Court queen, for a short period of time to visit his love again. Sorcha plummets into this incredible depression and brings Faerie down with her. Bananach, or, War, is completely ready to step in and take total advantage of the Queen's lack of Reason.

Devlin and Ani definitely have some difficult choices to make. Choices that will impact all of Faerie.

Like I said, my favorite of the ENTIRE series. I love Ani and Devlin and the story that surrounds them. And if you've read any of the rest of the books in the series before this one, I highly recommend RUNNING out to grab this one next.