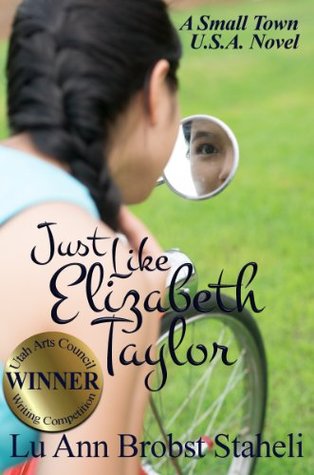 Twelve-year-old Liz Taylor has known for a long time that she would escape—escape the abuse against herself, and against her mother. She just didn’t know how or when.

Then the perfect opportunity comes—money left of the table by her mother’s abuser—and Liz is on the run. But a girl her age doesn’t have many options when it comes to hideouts, making a K.O. A. Kampground and a nearby middle school her perfect choices.

If only she can keep to herself, Liz, now using the name Beth, knows she can make it on her own, until things change, and she realizes she must face her situation head on if she is to save herself and her mom.

I wasn't sure what to expect when I decided to read Just Like Elizabeth Taylor by LuAnn Brobst Staheli. It was not a long winded book so I quickly found out the meat of it shortly after beginning.

Liz and her mother are being abused. Her mother by her boyfriend, and Liz by the boyfriend's son. Liz can't understand why her mother doesn't leave, but she won't. Liz decides she can't stay anymore and so she takes the boyfriends money and takes off. She parks herself at a KOA and enrolls in the school nearby. She's never reported missing. No one ever comes looking for her. She sets up camp in a shed at the KOA and does odd jobs in order to keep her money supply up so she can buy food, clothing, and things like a space heater to keep her warm during winter months.

She originally planned on keeping her head down and keeping to herself. But things don't always end up as planned.

My heart absolutely broke for Liz. And for her mother. But mostly for Liz. I know what it's like to be in an abusive relationship and so while I can relate to her mother... it makes me angry that she put her daughter in that situation with no real intention of getting her out of it. It makes me mad that Liz, who is the same age as my oldest daughter, would have to get herself out of harms way and live all by herself in an area completely foreign to her. No one to help her. No one to take care of her. No one to really care.

BUT... I was kind of peeved at Liz too, for not telling her mother about the abuse from the son. Who knows. Her life could have been completely different had she said something. Maybe mom would have snapped out of it and decided her daughter was worth more than being in a relationship just for the sake of not being alone. But then again, maybe not. You never know.

She was so strong. Liz was. So much stronger than I think I ever could have been at her age. Having to go through what she did and then having to fend for herself for the better part of a year. Not falling apart despite all she'd been through. Knowing that no one had cared enough to even report her missing. Not that I think she should have gone back to that hell hole... but just the fact that it seemed no one wanted her.

I'm glad she was able to make a friend. Even if she didn't want to at first. Everyone needs a friend. Not a lot. But one special one. Liz was lucky enough to make two. Well, three by the end of it all. And every one of them played a part in saving her. Helping her truly save herself.

It was a very short story. Easy to read. Length wise. Subject matter is another story. It was good. It definitely hit close to home, but it was good. And kudos to LuAnn for being able to pack such a story in such a short time and still manage to develop all the characters thoroughly and satisfactorily.

I'd recommend this book to readers age 12-13 and up. But with the younger end of the spectrum I'd definitely set aside time to warn them about what they were about to read and then talk to them about it. It's not light subject matter. In the slightest. Liz goes through some horrible things.

But she's so brave. To go through what she did and come out on the other side mostly in tact. She had more courage than most adults would when faced with the same type of situation. But she was also able to realize and understand that sometimes it was ok to rescue and it was also ok to accept a rescue.

Posted by WildIrishRose33 at 8:29 PM No comments: 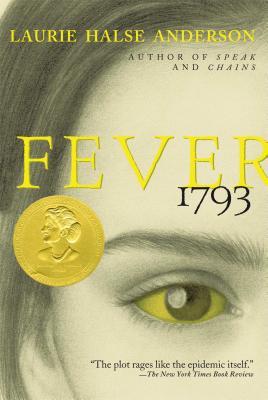 It's late summer 1793, and the streets of Philadelphia are abuzz with mosquitoes and rumors of fever. Down near the docks, many have taken ill, and the fatalities are mounting. Now they include Polly, the serving girl at the Cook Coffeehouse. But fourteen-year-old Mattie Cook doesn't get a moment to mourn the passing of her childhood playmate. New customers have overrun her family's coffee shop, located far from the mosquito-infested river, and Mattie's concerns of fever are all but overshadowed by dreams of growing her family's small business into a thriving enterprise. But when the fever begins to strike closer to home, Mattie's struggle to build a new life must give way to a new fight-the fight to stay alive.

I picked up Fever 1793 by Laurie Halse Anderson because of the cover originally. And the author. The blurb on the back totally sucked me in. I love historic fiction. Absolutely love it. Even a story as sad as this one.

Mattie's town is stricken with yellow fever. Her mother falls ill and orders Mattie out of the house and out to the country. Her grandfather, ever the military man, promises to deliver her to her destination and protect her with his life. But not long after leaving Mattie's grandfather also appears ill. They're kicked out of the wagon that's supposed to drive them and it takes off with everything but the clothes on their back.

Mattie, too, becomes extremely ill but manages to pull through to find that her grandfather is, more or less, well and ready to journey on. They decide to go back home to find Mattie's mother, but she's gone. And there's no way to find her. With so few people even willing to come out of their homes there's not even anyone to ask. So they find themselves back in the coffee house waiting to see what happens next.

Like I said, I love historic fiction. I love period stories with a passion. And Fever 1793 was fantastic. It's got enough in it to keep you turning page after page and before you know it, you'll be finished with it. The story is based on the actual yellow fever epidemic that swept through Philadelphia and displaced thousands of people, killing thousands more.

I love the actual history peppered throughout the entire book and how well it was fused with the life of Mattie Cook and her family. We got to see the plague through the eyes of someone who was there. Fictionally speaking, of course, but how many girls like Mattie lived in Philadelphia at that time? How many people had to go through the things she went through. The prospect of first love. The loss of a friend. Having to leave home after finding out she may also lose her mother. Her bird disappearing. Falling ill but recovering only to lose her grandfather during a burglary.

That was the part that got me. That hit me the hardest.

It was sad when her mother sent her away. When all she could see, hear, and smell around her was pestilence and death. But it broke my heart to pieces when her grandfather left her. Absolutely broke it to pieces. Big, mushy, blubbering pieces.

He had such a big heart. He was such a hero to Mattie. And she was a hero to him. He loved her so much and was determined to protect her and care for her with everything he had in him. I'm glad that this wasn't a story where the teenage main character was irritated and horrible to the grandparent that was only there to care for them. I think that would have been horrible.

But Mattie, she loved her grandpa every bit as much as he loved her. She rescued him every bit as much as he had rescued her. Unfortunately, for both of them, the last rescuing took too much of him. I cried. I will admit it. And it was bad because it was in the dentist's office. So I'm sure I looked like an idiot, but that's ok. Books that can pull emotion out of nowhere are the best books to read.

I liked that this book did not really end with a "and they lived happily ever after". As sad as that is. No one bounced back to where they'd been before the fever hit. It took its toll on everyone. Young and old. Strong and weak. It was realistic in its portrayal of the survivors. While I would have loved a happily ever after for some of the characters, life isn't always like that. Mattie found out how strong she was, despite her young age. Eliza, her friend and the cook for the coffee house, was able to move up in life to a position not many people of her color were able to reach during that time. Mattie no longer seemed scared of herself or worried about how to behave properly. She no longer worried about whether or not people viewed her as a child. She had found her place and earned her right to be where she was in the end. She worked hard.

I think that was about as happy as it could end. Through horrible illness and loss, she found out who she could be and how strong she was in the process. She became herself, instead of trying to fit everyone else's image of a girl her age.

This was a middle grade book. One that I might have read in 5th - 8th grade. It's definitely age appropriate, and I believe it's got enough in it to keep even the most reluctant reader reading. I'd recommend this to people of any age though. Not just children. Like I said, it's based in actual historical fact so you just might learn something you never knew before if you give this one a go!
Posted by WildIrishRose33 at 6:26 PM No comments: