So many of the books on my "To Be Read" list have since been conquered.

I've read Torment by Lauren Kate, Crescendo by Becca Fitzpatrick, and In Dreams Begin by Skyler White. I've also picked up some books that weren't previously on my list but caught my attention anyway.

Elixir by Hilary Duff (I kept telling myself I didn't want this one, simply because it was Hilary Duff (I know, judgemental much) but after a few passes I couldn't NOT grab it anymore) was awesome.

I'm a few pages in to Afterlight by Elle Jasper and waiting for it to really snag me.

However, even though my list has seen many come and go, it has not gotten any shorter. There are new books being added to it on an almost daily basis. Patiently (not so much) awaiting Darkest Mercy by Melissa Marr. I'm still waiting to pick up Stardust by Neil Gaiman from the bookstore. It's one of my all time favorite movies and I can't wait (and yet, apparently I am) to read the story behind the movie. I have been ordered to read the Black Dagger Brotherhood series by JR Ward.

So many books, so little time.

Will be posting a reivew of sorts of In Dreams Begin by Skyler White who was kind enough to send me a copy of the book about 1 month before its launch. Beautiful writing. That's about all I can say right now.

Read away!
Posted by WildIrishRose33 at 4:06 PM No comments:

So, I'm a book junkie. You all know this. I'm reading new books and re-reading old books, and just burying myself in stories all together. It's what I do when I have free time. Honestly, I do think I'm addicted. Think they have a program for people like me? Hope not. :-)

A few books on my read/to be read list are MUST READS for you too. No really, I will follow you until you have picked up and read every single one of them and reported back to me.
Just kidding.
Or am I?
Anyways, figured I'd give you all a run down of the books I'll be picking up this fall. Some of them for the first time, some of them for the 2nd, 3rd, or maybe even 4th time. Just incase you were looking for some new reading material. You can tell whoever you have to when you go to the store to buy them that they come HIGHLY recommended.... by me. Cuz I'm that cool.
Read: 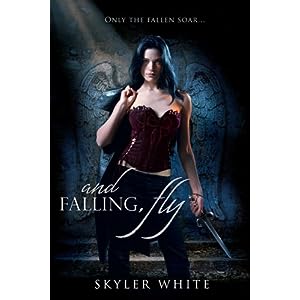 and Falling, fly by Skyler White. It's a debut novel for Skyler that I was lucky to win in a contest on The Cozy Reader's website. Jess always has awesome giveaways. It's something completely different than any other book I've picked up. Which is always good. I like the "run of the mill" fantasy/paranormal books. The ones where you can predict what's going to happen, but it makes you happy because you can. But it's always refreshing (that word still sounds so weird coming from me) to read something new. Something that no one else has ever done before. In the first couple pages of this one I was hooked. It had me wondering "What the heck?" And then laughing a few minutes later at a dinner conversation gone bad.
Amazon's summary: White's debut is a trippy urban fantasy, an esoteric battle between myth and science told in floods of evocative prose. Olivia, a fallen angel cursed to eternity without pain or pleasure, feeds on the blood of those who desire or fear her. Dominic is her polar opposite, a skeptical scientist explaining away the paranormal as mental illness. He immerses himself in neuroscience to seek a cure through selective memory removal; haunted by images of his past lives, he begins experimenting on himself. Looking for research subjects, Dominic finds Olivia. She longs to be set free by love and returned to heaven, but at what price? Reeking of blood and sex, the swaths of atmospheric text sometimes overwhelm the story. Despite the story's enormous plot holes, longtime paranormal fans will appreciate White's willingness to take chances and try something new. (Mar.)
Copyright © Reed Business Information, a division of Reed Elsevier Inc. All rights reserved 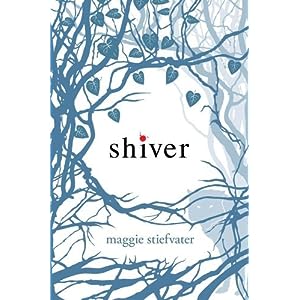 Shiver by Maggie Stiefvater. I know, I know. I've already posted about this one... right? I think I have, in my Summer Reading list post. Anyways, I was all set to try and compare Sam to Jacob Black... but this book couldn't be compared. Again, another new concept to the way we look at the things we've heard so many stories about, over and over and over. Don't get me wrong, New Moon is one of my favorite books, but it's like apples and oranges when the 2 are put side by side. This one kept me on the edge of my seat and had me crying at the end, and if any of you know me, you know I absolutely cannot stand to cry. Because I blubber. Seriously.
Amazon review: Praise for Shiver: "A lyrical tale of alienated werewolves and first love... Stiefvater skillfully increases the tension throughout; her take on werewolves is interesting and original while her characters are refreshingly willing to use their brains to deal with the challenges they face." -Publishers Weekly, starred review "Readers will be able to enjoy Stiefvater's fast-paced storytelling and dedication to the old-fashioned art of creating a believable and enduring romance. Shiver is beautifully written, even poetic at times, and a perfect indulgence for readers of all ages." -Bookpage.com
To Be Read: 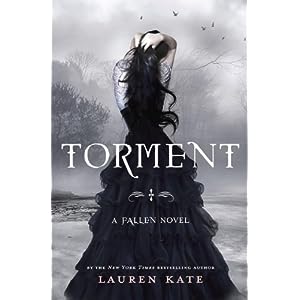 Torment by Lauren Kate. Sequel to Fallen. Fallen was a good book. The ending didn't seem to really go with the rest of the book, but it was a great read. Can't wait to hear more about Luce and Daniel's "past".
Amazon description: Hell on earth.
That’s what it’s like for Luce to be apart from her fallen angel boyfriend, Daniel.
It took them an eternity to find one another, but now he has told her he must go away. Just long enough to hunt down the Outcasts—immortals who want to kill Luce. Daniel hides Luce at Shoreline, a school on the rocky California coast with unusually gifted students: Nephilim, the offspring of fallen angels and humans.
At Shoreline, Luce learns what the Shadows are, and how she can use them as windows to her previous lives. Yet the more Luce learns, the more she suspects that Daniel hasn’t told her everything. He’s hiding something—something dangerous.
What if Daniel’s version of the past isn’t actually true? What if Luce is really meant to be with someone else?
The second novel in the addictive FALLEN series . . . where love never dies. 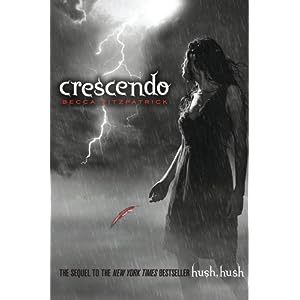 Crescendo by Becca Fitzpatrick. Sequel to Hush, Hush. Hush, Hush drew me in because of the cover (I know, never judge a book by its cover, but I can't help it). And then because it was set in Maine, which is where I live. So some of the places were familiar to me. Patch is the bad boy that you love to hate at first and then can't help but just love later on.
Amazon description: Nora should have know her life was far from perfect. Despite starting a relationship with her guardian angel, Patch (who, title aside, can be described anything but angelic), and surviving an attempt on her life, things are not looking up. Patch is starting to pull away and Nora can't figure out if it's for her best interest or if his interest has shifted to her arch-enemy Marcie Millar. Not to mention that Nora is haunted by images of her father and she becomes obsessed with finding out what really happened to him that night he left for Portland and never came home.
The farther Nora delves into the mystery of her father's death, the more she comes to question if her Nephilim blood line has something to do with it as well as why she seems to be in danger more than the average girl. Since Patch isn't answering her questions and seems to be standing in her way, she has to start finding the answers on her own. Relying too heavily on the fact that she has a guardian angel puts Nora at risk again and again. But can she really count on Patch or is he hiding secrets darker than she can even imagine? 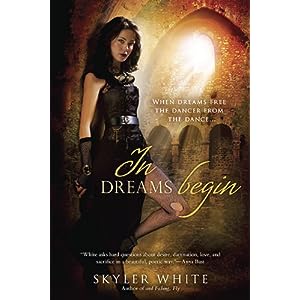 In Dreams begin by Skyler White. Yes, the very same. Your eyes do not deceive you. Wicked excited about this one. Not ONLY because the 4th word in the description says IRELAND (and I love all things Irish... you wouldn't know it by my married name, but I am Irish) but because again, it sounds like one of those stories that you just haven't heard before. Unpredictable. I love period stories, and this sounds like one with a twist. Because it's a modern day tale as well.
Amazon description: From a Victorian Ireland of magic, poetry and rebellion, Ida Jameson, an amateur occultist, reaches out for power, but captures Laura Armstrong, a modern-day graphic artist instead. Now, for the man or demon she loves, each woman must span a bridge through Hell and across history . . . or destroy it.
"Every passionate man is linked with another age, historical or imaginary,
where alone he finds images that rouse his energy." W. B. Yeats
Anchored in fact on both sides of history, Laura and Ida, modern rationalist and fin de sicle occultist, are linked from the moment Ida channels Laura into the body of celebrated beauty and Irish freedom-fighter Maud Gonne. When Laura falls--from an ocean and a hundred years away--passionately, Victorianly in love with the young poet W. B. Yeats, their love affair entwines with Irish history and weaves through Yeats's poetry until Ida discovers something she wants more than magic in the subterranean spaces in between.
With her Irish past threatening her orderly present and the man she loves in it, Laura and Yeats--the practical materialist and the poet magus--must find a way to make love last over time, in changing bodies, through modern damnation, and into the mythic past to link their pilgrim souls . . . or lose them forever.

Some other books that I'm interested in, but can't post for lack of time currently are (and not all of them come out this fall):
Angelfire by Courtney Allison Moulton
Temptest's Legacy by Nicole Peeler
Lady Dragon by Jewell Mason (which I actually picked up at work off the book swap table!)
Forever by Maggie Stiefvater (I'm going to have to WAIT FOREVER for this one)
Lament by Maggie Stiefvater
Ballad by Maggie Stiefvater
Clockwork Angel by Cassandra Clare
Dark Divine by Bree Despain
The Lost Saint by Bree Despain
Darklight by Lesley Livingston
Eyes Like Stars by Lisa Mantchev
Perchance To Dream by Lisa Mantchev
Luthiel's Song: War of the Mists by Robert Fanney
So there you have it... probably not the entire list, but definitely most of the books that I would like to read in the coming months.
Posted by WildIrishRose33 at 4:02 PM No comments: