Review - The Caldecott Chronicles No. 1 by R.G. Bullet 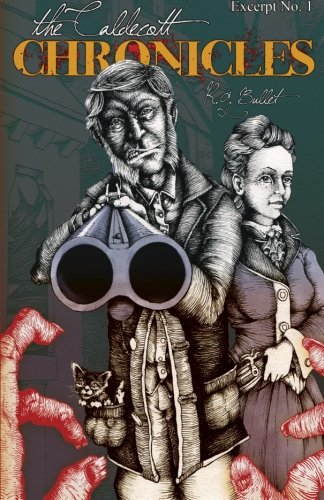 I received this copy of The Caldecott Chronicles: Excerpt No. 1 by R.G. Bullet in exchange for an honest review. And I've got to tell you... honestly? I loved it.

It's a short story so it was a quick read but it was wicked fun and funny throughout the entire book. Aldersley Radclyffe (32nd Earl of Rothshire) is in a gruesome situation but still manages to keep his wits and sarcastic humour about him, and it was just fantastic to read through his letters to his son.

He takes us on his journey to find ammunition after his drunken and lame brother wastes it all shooting through the roof and on the way we get to see him... dispatch... of the "obstacles" he comes across with all the grace and dignity that he can muster. He even finds a few surprises while he's out. One that turns out to be a blessing in disguise.

The story is set just before the turn of the 20th century so the language is a tad bit more sophisticated but it flows well just makes it that much more interesting to read and it was pretty comical given the circumstances of the story.


That was the end of Mrs. Aldeshot - do you remember her? She's been up to the house many a time for Christmas  carols. She was a wonderful mezzo soprano. 'C' all the way up to an 'A'. However, I'm pretty sure she hit a rare 'high A' near her demise.

Not once is the word ZOMBIE mentioned in the book, but boy are they everywhere. The illustrations give us a peek at just how gross and mangled some of them are. I will say, I wish there'd been more illustrations, but I think that's the only issue that I had with the whole thing.

Definitely pick this up if you're looking for something fun to read. It's quick and it'll make you laugh the entire time. Of course there are some parts that'll have you worried, but would it be a good book about zombies if there weren't some nailbiting parts?

Probably, but they make it that much better!

You can visit his website to find out more about the series and also enter to win a Kindle Touch or a Nook Simple Touch! And to keep up with him follow him on Twitter or on Facebook!